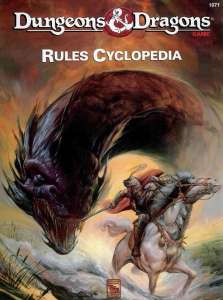 My very first D&D game was the legendary red box, and thus the D&D becmi rules still resonates in a special manner for me, as does the Mystara-setting which was associated with the D&D becmi-rules. So it was fun to return this system, wonky as it is, and try playing it, while still running D&D 5th edition with a different group of players.

Recently we chose to play the D&D module M5 Talons of Night, which is a Master Level adventure (meaning the module is written for use with the Master Set (black box) covering levels 26-36), and the characters are all level 25+. We are utilizing the compiled rules from Rules Cyclopedia, when playing but with no additional rules.

High-level play is a strange thing with the party running around with a 100 soldiers, various henchmen and the ability to ressurect 10+ people a day. Yet hit points are few, and everything is ‘Save or Die’, so though most saving throws are succesful on 2+ failing just once will kill your character.

The rules are wonky, as they require a lot of interpretation when used, as they are not systematic, as seen in later editions, and many things are tied up to subsystems (roll high for attacks, roll low for ability tests, roll d6 for initiative, THAC0, Low AC is good), rather than using a unified system. D&D 3rd edition did bring some much needed structure to the game, and yet things being so simple also makes it easy to play. Even level 25+ characters were created quickly and without much fuss. On the other hand, there are many ’empty levels’, which you must earn huge amounts XP to gain, yet the only thing gained are a couple of hit points and that is that.

Returning to D&D becmi reminds why D&D had its appeal back in the 80’s (where I began playing), but also why some many have tried to redo simple versions of D&D, for though I claimed in a previous post about D&D 5th, that it is simple, yet it is only simple compared to D&D 3rd and D&D 4th, but not to many other fantasy-games – for instance games like The One Ring and Forbidden Lands.

Playing D&D becmi at level 25+ is fun and strange and the many ressources available for the characters create a strange game, and not something I will be playing much of, I will return to low-level D&D becmi (as well as AD&D) from time to time, and perhaps do my own interpretation of the system one day (just to get rid of a few wonky mechanics), or perhaps instead of yet another D&D-hack I will just be playing Dungeon Crawl Classics and Beyond the Wall.