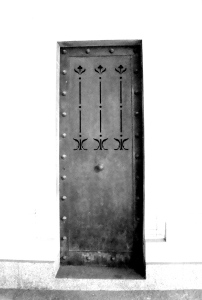 Scouts report, that they have seen a hill standing on burning pillars. What lies behind this mystery, why is an army of kobolds on the march, and what strange force is calling you from the dark depths of its forgotten tomb?

Welcome to the fifth adventure translated from Danish to English in the line of Hinterlandet (The Hinterlands) adventures. This time the module has been adapted to Labyrinth Lord, and is thus compatible with D&D becmi and various retro clones as well. It is oldschool adventure rich with opportunities for roleplaying.

The adventure is part of the Seven Swords of the Dwarves storyline, and it is the adventure that sparked the storyline for the next two years, where the players in Hinterlandet Living Campaign fought against The Dragon and its cult while searching for weapons to defeat the Dragon with. This is an adventure, that allows you to set loose a great villain on your campaign and let the players be in the center of it all, as they are the ones to (accidentally) unleash the foe. The adventure is followed by the adventure, The Flooded Temple, as it is from the first storyline about the Dragon – The Dragon Awakens – where the adventurers go searching for weapons against the Dragon, and the Cult of the Dragon is trying to stop them.

A large part of the fun with this adventure was seeing the players interact with the residents of the dungeon, especially when they discover, they are under siege, and hostile humanoids wants to enter the ruins. Another great moment was when the players figured out how the tomb worked (no spoilers here), and that this moment allowed a player to let her character become a central villain in the Living Campaign as she became a Herald of the Dragon.