Almost two weeks ago I attended Knudepunkt, the Scandinavian larp-conference. This year it was in Denmark, as the conference rotates between Norway, Sweeden, Denmark and Finland.

Knudepunkt is a fascinating experience and unlike any other conventions, that I attend. For one thing you get to meet a lot of enthusiastic people, who are there to talk and discuss roleplaying – and though it is called a larp conference, many topics in relation to roleplaying in general are discussed, however it is not the place, you’ll find many talking about classical roleplaying such as D&D, GURPS or Shadowrun.

Another thing is of course the many different attendees, as people from many parts of the world participate each with their own traditions and ideas as to what roleplaying is. It was all very exciting. I got to see a lot different talks and presentations, and met a lot of new people and a lot people, that I had not seen in a long time.

I ended up with a lot a of material from Knudepunkt: Playground Magazine, Larp Zeit – International Edition, Nordic Larp, and  this years three Knudepunkt-books.

At Knudepunkt Playground Magazine held its release party, a Scandinavian magazine covering the new wave in roleplaying. The magazine is in English, and it is finally out and in the open. There are a lot of exciting articles in there, some about roleplaying in Czechia and Poland, on the relation between The Game and roleplaying, and relationships arising from larping together.

Besides Playground Magazine, there is the huge tome Nordic Larp, which is tremendous. It is a gigantic coffee table book, that covers several different types and styles of larp. Among others Delirium, which also produced the following documentary. 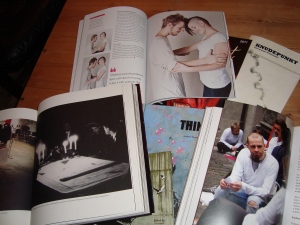 The book on larping in the cold north, you’ll find here: Nordic Larp

Every year Knudepunkt publishes a book on larp. This year they produced three books, each in hardcover and each filled interesting material about roleplaying. Think Larp is the academic, peer-reviewed publication, Do Larp is the book about different laps and how to do them, and Talk Larp is the ‘rant’ book, with prolemic texts about roleplayers and their roleplays. 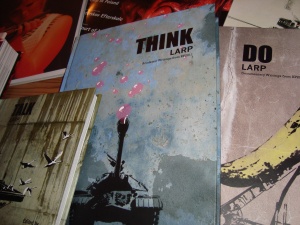 You can download the three books here for free or buy a printed copy.