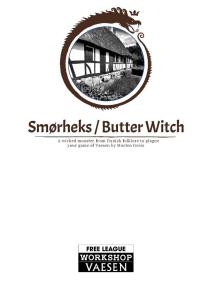 Butter was an important commodity in the medieval and early modern Scandinavian societies and even today Denmark exports many tons of butter to neighboring countries such as Britain. It was also a product that required hard work for the pre-industrial societies to produce, and the production could easily fail as the chemical intricacies relating to the churning of cream was not well understood. There was a widespread belief in the supernatural and witchcraft regarding butter churning with spells to steal butter, butter to curse farm animals and special witches’ butter or troll-butter, that allowed wagon wheels to spin by themselves or witches to fly on brooms to their secret convents. If you cut a cross into the butter it would bleed.

From Danish folklore collected in the 19th and early 20th century is derived the butter witch for the roleplaying game Vaesen – Nordic Horror Roleplaying. You can download the Butter Witch for free at DriveThruRPG: The Butter Witch.

There are many curious stories about superstitions and witches when it comes to butter. Few if any have been published in English, and I therefore present a few here picked from Danske sagn, som de har lydt i folkemunde published 1892-1901. These are oral tales written in an older language and getting the tone right is not easy when translating them:

A wife from Bedsted used to say when she churned: “Butter from Hurup and butter from Grurup and butter in my tiny churn.” She kept going in that manner and thus she drew butter to her from all the different places in the vicinity.

(The use of ‘wife’ in the stories reflects the use of the word ‘kone’ meaning wife but also carrying the meaning ‘bondekone’, farmer’s wife, referring to a female farmer and the female head of the household)

An Larses churned one time, while a tailor was watching. While she was away for a moment, he noticed a small note on the churn. He took it and placed it in his pocket. When she came in, the butter was running out of his pants. In that manner she too butter from the other town wives. When she placed the note, she said: “A Spoonful of butter from every wife.”

Jens Plovgård’s wife Maren from Ramme was also a witch, and when she was churning, she placed the empty churn in the common room, and then she said: “Now in the name of God a spoonful from every man and a trayful from Rammegård [The farm of Ramme].” Then she would have the churn full and have such wonderful butter. One day she was not at home, and her daughter had to churn, but she was greedier than the mother and said: “A trayful from every man and a bucketful from Rammegård.” Then she stood with cream up to her waist.

The witches churned on Saint John’s Eve [Danes celebrate summer solstice on this night]. One night a girl went and smeared Jens Ilder’s doors with that butter, as she likely would curse his livestock. But he scraped it off and collected it in one place, and then loaded his gun and shot into it, and so he hit the girl and shot he back full of it. Then she had to go him for council. Yes, if she would promise never to do it to him and anyone else, he would cure her, or otherwise she would remain as she was. That she had to promise, and then he cured her.

A man in Sangstrup saw one day, that in a grove in a corner pole sat something looking like butter, and every day the amount increased. “it must be burned”, he said, and following that he took it and placed it in the fire. There immediately a man came running and asked to loan 10 rigsdaler [Danish coinage at the time]. The warlock had to appear immediately and pretended to have an errand. Naturally he received no money but was chased away. The butter has been placed for the man’s cattle to lick it off and die thereof.

Rasmus Væver in Egitslevmagle had a cow whom a wife had cursed, so that it was impossible to gain butter from its cream. He then sought a clever woman who lived in Sørbymagle, and she discovered then, that it was the neighboring wife who had taken the butter from the cow. He was given something to drip into the churn, so then wife who was the cause would come and ask for a taste of milk, when she felt they were about to churn, but they were not to give her anything, except if they had some, that was sour. She arrived just as the clever wife has said. […]

(It is a common theme, that when trying to stop the thievery, the witch comes visiting under a false pretense. In other stories it is the first person encountered after the counter act or counter magic has been employed, who is the thief. Often a clever man or a clever woman counsels the farmer)

There is a place down here in the lower of Dybdal [deep valley] (Vinkel parish), and there the old witches residing here in the parish went to churn butter on the night of Voldborg [i.e. Valborgsaften or Walpurgisnacht named after saint Walpurga] according to the tales of the old ones.

There are many more tales in Danske sagn, som de har lydt i folkemunde than the meager collection gathered here, and the butter witch is based on a wide range of these stories.

I have previously also covered another supernatural being from Danish folklore, the skelflytter (or fence ghast as I have dubbed it), which you can find here: Skelflytter.